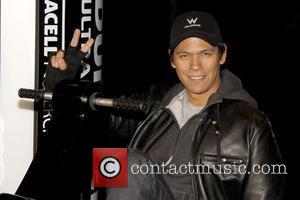 Picture: Chaske Spencer from the film 'New Moon' Celebrities and Santa help light up the holiday season while pedaling for power at the Duracell Smart Power...

Chaske Spencer has a stint in rehab to thank for landing him a role in THE TWILIGHT SAGA: NEW MOON, because his reported struggle with drug addiction threatened to ruin his career before it had even begun.
The 34 year old is alleged to have checked into Washington state's Northwest Indian Treatment Center, a rehabilitation facility for Native Americans, in 2008 after learning he had been shortlisted for the role of Sam Uley, the leader of the wolf pack in the Twilight sequel.
Ray Martin claims he was a patient at the centre at the same time as Spencer and alleges the actor feared he would lose out on the job if he didn't get clean, quick.
Martin tells the National Enquirer, "Chaske confided to me that he was up for a role in a 'really big movie' and didn't want to screw it up.
"He said, 'If anyone finds out I'm here, it would be the worst thing in the world. It could ruin my career!'"
Spencer successfully completed a five-week course at the facility and has been sober ever since.
And Martin is happy Spencer has landed his big break, adding, "I don't think Chaske could have done the film if he hadn't gone through rehab first. He got a new lease on life, and then New Moon."