Charlotte Church Teamed Up With Greenpeace Activists To Stage A Musical Protest Outside The London Headquarters Of Oil Giant Shell On Wednesday (26aug15). 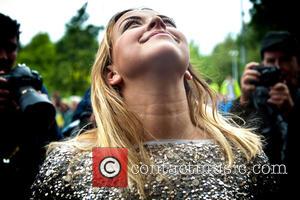 The grown-up child star performed Dinah Washington's This Bitter Earth backed by a string quartet as part of a protest over Shell's drilling efforts in the Arctic.

She told supporters, who gathered under a railway arch to avoid a rainstorm, that she hoped the song would make Shell staff question their company's actions.

Church said, "I think it's a really interesting form of protest to meld protest with art and I think this was really smart."

Shell executives were given permission to drill for oil in the Arctic Ocean off Alaska's north west coast for the first time in more than two decades earlier this year (15).

Church added, "What's happening at the moment is exploitative. I hope to use my voice to raise the profile of Arctic drilling... This is for the people over there, for them to feel some empathy and make them question what they're doing."