Charlize Theron admits she still gets anxious and nervous when she has to walk down a red carpet after 17 years in the movie business. 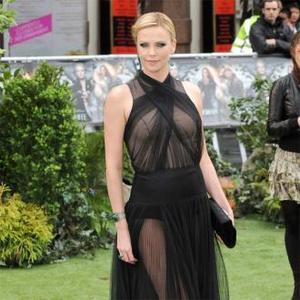 Charlize Theron still gets nervous on the red carpet.

The 36-year-old screen beauty - who adopted a son, Jackson, in March - admits she is moved when fans come out to greet her at premieres but still gets anxious at the glitzy events, despite her lengthy career as a Hollywood star.

Speaking on a special green carpet at the UK premiere of 'Snow White and the Huntsman' in Leicester Square, London, last night (14.05.12), she told BANG Showbiz: ''Red carpets are still the same so far as anxiety and nerves. I don't think that ever goes away because it's a lot of attention! But it's so moving that everyone comes out to support us. That always, always amazes me. It's flattering. It's sweet and I try not to think about it. Of course it's intimidating''

Discussing her role as the evil Queen Ravenna in the Rupert Sanders-adaptation of the classic fairytale, Charlize reveals she did not want the character to be entirely two-dimensional as no person is ever defined by just one trait.

She added: ''We wanted her to be a human being. She had to be someone who was really struggling with her conflict. I think of them as just evil and struggling. I think any of us are just one thing.''

Charlize was joined on the green carpet by stars of the film including Kristen Stewart, Chris Hemsworth and Ray Winstone.