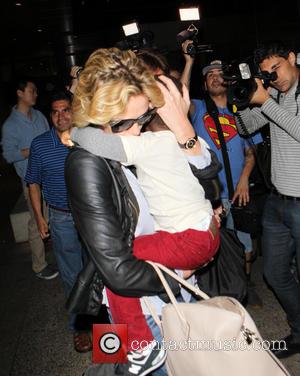 Actress Charlize Theron has fuelled rumours she is preparing to wed boyfriend Sean Penn after she was photographed wearing a new sparkler on her ring finger on Wednesday (23Jul14).

The Monster star, who is mum to adopted son Jackson, began dating her longtime friend Penn late last year (13) and recent reports suggest the highly-private couple is planning to take its relationship to the next level by walking down the aisle.

Sources tell UsMagazine.com Theron and her new man are set to exchange vows in her native South Africa later this summer (14), and now new pictures of the actress arriving at Los Angeles International Airport have given weight to the claims.

In the snaps, the 38-year-old beauty, who is wearing minimal make-up and jewellery, flashes what appears to be a diamond engagement band on her left ring finger.

A representative for Penn has declined to issue a statement on the report, while a spokesperson for Theron has yet to respond to Wenn's request for a comment.

If the rumours are true, it will be Theron's first wedding, while 53-year-old Penn was previously married to Madonna and newly-engaged actress Robin Wright.