After winning an Oscar for Monster in 2003, Charlize Theron has mixed serious roles with increasingly ambitious action movies, hitting the big time with the 2015 blockbuster Mad Max: Fury Road and this year's The Fate of the Furious. And now she's starring in and producing her own kick-ass thriller Atomic Blonde, saying that "physical storytelling" is in her blood.

"I think it's the ballerina in me, the fact that I started as a dancer," she explains. "I'm not interested in doing stupid things, but I am interested in learning new things."

To prepare for her role as Lorraine in Atomic Blonde, she had nearly three months of physical training. "I had eight amazing trainers that basically made me puke every single day," she laughs. "And I am very grateful to them. I'm coordinated because I was a dancer, and I definitely have movement memory, but I've never been a fighter. I'm also really tall and a girl, which tends to make you look like you're Big Bird!"

While shooting the film, she felt it was important to do almost all of the stunts herself, taking in stride a series of injuries that included a twisted knee, bruised ribs and two cracked teeth.

She also wanted to get under the skin of her character, a British spy with no back-story. And she liked it that way. "You know nothing about this woman," Theron says. "It's so rare that a female gets that in a movie. A lot of critics had issue with it, but that's such old-school thinking. You don't need to be emotionally manipulated to feel something for someone." 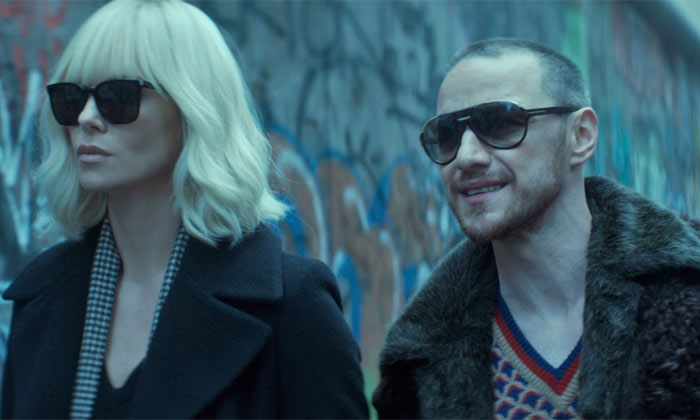 Theron is a rare actress who can take on demanding dramatic roles alongside action thrillers. And there's a lot more that she wants to do. "More than characters and stories," she says, "for me it's excitement at wanting to work with people - new filmmakers and writers that are pushing the envelope and making people think. I'm always excited about that aspect of it."

And she's looking forward to making more movies with women in the lead roles. "I always tell studios to make more female-driven movies," she says. "Not just actors, but producers, directors, writers. And they always say, 'We would if they go see them.' So go see them! We need audiences to support us. We need you to make it clear we're just as good as the guys. Plus, we have boobs. They don't have boobs!"

Watch the trailer for Atomic Blonde: