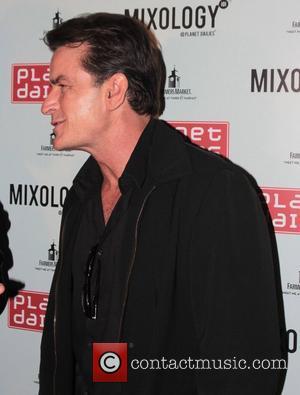 Charlie Sheen will make an appearance at the 2012 MTV Movie Awards, adding to the unpredictable yet entertaining looking line-up for this year's show. Sheen heads an all-star list of presenters, and will also stick around to introduce performer Wiz Khalifa, who performs new single 'Work Hard, Play Hard', reports Mtv News.
Perhaps fitting for his party-lifestyle, Sheen will also be responsible for introducing a fun-filled celebration of the greatest party movies of all time. He joins a slew of other A-list star presenters at the annual bash, including Adam Sandler, Leighton Meester, Emma Watson, Esra Miller, Michael Fassbender, Mila Kunis, Andrew Garfield and Mark Wahlberg. On top of all that, the awards ceremony will also feature an exclusive look at the new Batman movie 'The Dark Knight Rises', starring Christian Bale and Gary Oldman. Comedian Russell Brand will be on hand to host the show, which airs live from the Gibson Amphitheatre in Universal City, California, on Sunday June 3, 2012.
Following his well-documented departure from 'Two and a Half Men', Charlie Sheen returns to screens on June 28, 2012, in 'Anger Management' - a comedy series based on the Jack Nicholson movie of the same name.