Charlie Sheen and Brett Rossi threw a $100,000 party at their Beverly Hills home to celebrate their engagement last weekend. 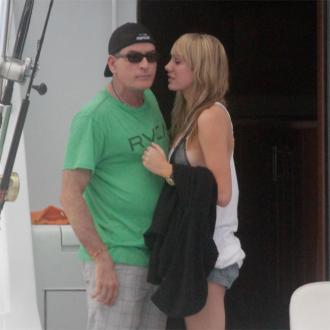 Charlie Sheen celebrated his engagement with a $100,000 party at the weekend.

A source told RadarOnline.com: ''Brett had been asking Charlie to throw a huge party for them celebrating their engagement and he agreed to last weekend.

''The party was absolutely stunning, and must have cost Charlie at least $100,000.

''The event was catered and a party planner was enlisted to take care of the details so Brett and Charlie could just enjoy the festivities.''

The couple are reportedly planning to tie the knot in the next few months and among the guests will be Charlie's third wife Brooke Mueller, who has previously had an acrimonious relationship with following a number of rows over the custody of their sons Bob and Max, five.

The source added: ''[Charlie and Brett] both had the idea to invite Brooke to their wedding. They all get along and are one big happy family. It might be unconventional for most people, but not for Charlie's wacky world!

''Having Brooke at the wedding will also show the twins that they all get along.''

Charlie - who also has a grown-up daughter Cassandra with ex-girlfriend Paula Profit, and Sam, 10, and Lola, eight, with second with Denise Richards - and Brett are keen for the boys to play a big part in their wedding.

The source added: ''The twins are going to be a part of the wedding ceremony. Charlie and Brett are planning on giving them special gifts to make Bob and Max feel a part of their new family.''