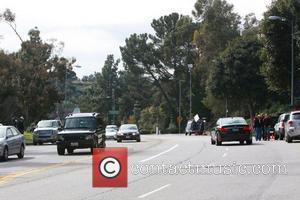 Picture: The media gather outside the private community where actor Charlie Sheen lives in Los Angeles, California on March 2, 2011. Sheen lost custody of...

Charlie Sheen has issued a public apology to Tv peer John Stamos after suggesting his stalled sitcom Two And A Half Men "sucks" if the former E.R. star is drafted in to replace him.
Stamos has denied he's in talks to step in for the troubled actor on the show, but it seems he's a favourite among fans - more than 30 per cent of the 20,000 viewers polled in a new Tv Guide survey stated they'd love to see the actor on the programme.
In an interview with Access Hollywood on Monday (28Feb11), Sheen said, "I like John but he don't have what I have and the show sucks if he's on it. Sorry!"
But on Wednesday night (02Mar11), during an interview with Los Angeles news network Ktla 5, a calmer Sheen spoke directly to Stamos, stating, "I was out of line. You're a beautiful man, a talented man and if you get the gig, we should talk."