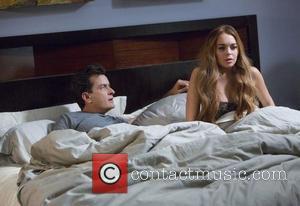 Charlie Sheen, who suffered a remarkable fall from grace last year before somehow turning it in his favor, has paid off Lindsay Lohan's 100k tax bill in one go. According to TMZ.com, the Liz & Dick star had mentioned her problems with the IRS on the shoot of Scary Movie 5 in September, which is when Sheen opened his check book, scribbled down a '1' followed by five noughts and made her problems disappear.

Despite her tax problems, Lohan has had a pretty decent year, getting paid $1 million for her Playboy shoot, before pulling in another $1 million from Liz & Dick, Scary Move 5 and The Canyons. However, Sheen continues to earn a fortune from Anger Management and is truly one of the highest paid actors in television. On top of that, he finalized a multimillion-dollar settlement with Warner Bros following his firing from Two and a Half Man. According to the Los Angeles Times, he walked away with around $25 million in profit sharing and will get another $100 million in syndication profits over the next 7 to 10 years. He was previously paid around $1.44 million per episode of the show, before his behavior left bosses with no choice other than to fire him. Without taking into account the settlement (or FX's massive order for Anger Management) Sheen's net-worth is said to be around $85 million.

Maybe Wesley Snipes should have called up Charlie for a little bit of help. We'd recommend R Kelly picks up the phone sharpish.