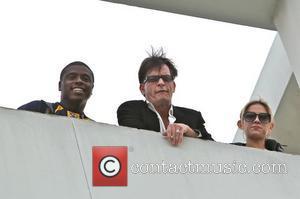 Picture: Charlie Sheen and Natalie Kenly aka Natty Charlie Sheen continues on his whirlwind media tour and stops on the roof of the Live Nation...

Charlie Sheen is planning another bizarre Internet broadcast of his show Sheen's Korner on Tuesday night (08Mar11).
The embattled TV star launched the show on Saturday night (05Mar11) with a rambling 50-minute broadcast, during which he chatted with pals in a back room of his home, showed off a new tattoo and continued a 10-day war of words with the producers of his cancelled sitcom Two and a Half Men.
He then tweeted his regrets about the ill-advised UStream.tv chaos on Sunday morning (06Mar11) - hours before he took to the Internet again for a bizarre 13-minute broadcast, in which he appeared dishevelled, manic and hyper.
He mourned the death of his pet pug and chatted to a fan, who had phoned Sheen to offer him advice.
And now he has announced he'll return the the UStream web channel on Tuesday night, promising to chat to fans about his "manifesto" following TV producers' decision to fire him from his sitcom.
Meanwhile, a court showdown between Sheen and his estranged wife Brooke Mueller - over custody of the couple's twin sons - was called off on Tuesday (08Mar11) after both agreed to negotiate.