Charlie Sheen And His Ex-wife Denise Richards Have Been Slapped With Legal Papers After Allegedly Failing To Settle An Invoice For Their Daughters' Private Tutoring. 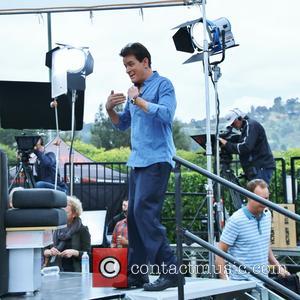 Company executives have sued Richards for the full amount, naming Sheen as a defendant, reports TMZ.com.

Representatives for Richards and Sheen have yet to comment on the suit, which emerges just two days after the former couple blasted one another on Twitter.com.

Sheen marked Father's Day on Sunday (21Jun15) by slamming the former Bond girl as "a heretic washed up piglet", amid speculation the exes had fallen out over time spent with Sam and Lola that weekend. Richards later hit back by sarcastically tweeting, "Happy Dad's Day! @charliesheen have a great trip in Mexico! Kids were disappointed u (sic) weren't here for it - Hey we'll celebrate when u r (you are) back!"

Sheen's press agent Jeff Ballard also took aim at Richards in a chat with People.com, accusing the actress of snubbing an invite to join the Wall Street star and his twin sons with third ex-wife Brooke Mueller in Mexico, and then trying to bad mouth his client.

Firing back at Ballard on Tuesday (23Jun15), Richards tweeted, "Jeff I think you had way too much to drink @jeffballardpr & lost your memory dude. Zip It. @people"

Richards filed for divorce from Sheen in 2005 after three years of marriage and they subsequently became embroiled in a bitter custody battle over their daughters.