In many ways, Charlotte Aitchison is an atypical twenty first century star-in-the-making: whereas most of those around are trust funded, stage school veterans whose every nuance is airbrushed into bland conformity, both her past and present are rapidly becoming fascinatingly full of risks. 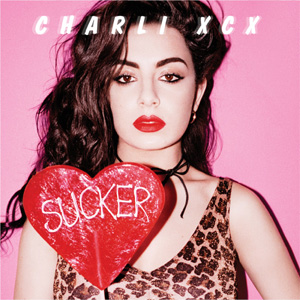 If Wikipedia is to be believed, Charli XCX began her fledgling career performing in seedy London clubs at just 14 (although, disappointingly, this law-breaking was apparently with the support of her 'rents) but still, it makes for far better reading than a walk on appearance in 'Jack And the Beanstalk' in Dartford. This string of improbability continued via both of her tracks 'Nuclear Seasons' and 'Stay Away' winning single of the week accolades from our bearded competitors, despite neither really pulling up any trees.

Either was a signpost for her debut album, 2013's 'True Romance', on which the destination of travel was competent, if unremarkable, synthpop. It seemed at this point a good bet that the industry machine had taken any rebel spirit and neutered it: how wrong could we have been? 'Sucker' is the sound of a performer upping the ante spectacularly, breaking rules and in the process taking her audience to places that will need plenty of understanding from nonplussed guardians. In short, she's made a pre-teen album for grown ups, and boy, has she done it well.

Like all great releases, 'Sucker' works on a number of levels, superficially full of bratty hooks and hormonal tantrums, whilst more careful listening reveals a harder, darker undercurrent. This is adolescent music for sink estate girls; kids who've seen too much and which the Daily Mail are always warning about. That said, their younger sisters will love the bygone naivete of 'Need Ur Luve', 'Breaking Up''s playground chanting and 'London Queen''s mockney, alt. Pygmalion badness. Gone, in fact, is most of 'True Romance''s tendency for by-the-numbers diva facsimiles, but when she needs to, the singer brings her pop "A" game, the collaboration with Rita Ora on 'Doing It' as sophisticated as some of the rest is calculatingly dumb.

That knowing doppelgänger we spoke about before is, however, the main revelation. You can imagine the reaction, for instance, when 'Sucker''s Mumsnet-unfriendly swear count was played back to the suits, as overt as possible on the title track, but leeringly present throughout. Then comes the delinquent hedonism of 'Break The Rules' and its prefect caution bashing sentiment: "Going to the discotheque/ Getting high and getting wrecked/ I don't wanna go to school/ I Just want to break the rules". Being all square and grown up about it, neither of these things are much worse than the shopping centre on a Saturday afternoon, but the drug references (on 'Die Tonight') might leave even the open-minded a little nervous, although they probably won't pick up the masturbation theme in the lyrics of 'Body of My Own'.

Alongside these middle fingers to the man, the music which accompanies all this chaos has undergone what some might see as a backwards evolution, now more basic, urgent and digestible. It's this abandonment of maturity which makes 'Sucker' so eminently likeable. There are no pretences here, other than just to render culture down to its nakedly consumable lowest common denominator, the riff-laden swagger of 'Gold Coins' a twisted sketch of celebrity life seen through the lens of the 'BGT' generation, snotty sense of entitlement and all. Sounds crap, right? Wrong. It's brilliant, like many of its counterparts, its creator cribbing the trans-generational DNA of Toni Basil, the Spice Girls, Shampoo, even Garbage, and giving it a Kohl-eyed, tattoos 'n' booze makeover.

Perhaps having seen the future as a puppet on a string modern stars, Charlie XCX realised that its fake couture and lack of authenticity wasn't for her. Maybe she went with her instinct. Either way, 'Sucker' sets a standard few will be able to reach this year. Even if they do all their homework.