Fans Of British Band The Stone Roses Were Sent Into A Frenzy On Monday (02nov15) When A Poster Campaign Featuring Their Lemon Logo Was Launched In Their Hometown Of Manchester, England. 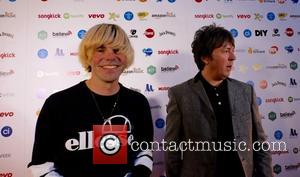 The posters featuring 16 lemons, the fruit which appeared on the cover of the band's self-titled debut album, appeared in several shops across the city and prompted speculation the rockers are planning to announce a new album and tour.

If the rumours are correct, it will be the iconic band's first release of new music for more than 20 years, since their second album, Second Coming, in 1994.

Speaking to WENN, a member of staff at Vinyl Revival, one of the shops decorated with the posters, confirmed employees were provided with the materials on Monday morning and they relate to a forthcoming announcement from the band.

"All I can divulge is that there will be an official announcement or press conference related to the Stone Roses within the next 24 hours," the record shop worker explained.

Other British musicians added to the speculation by posting lemon-related tweets, with The Charlatans frontman Tim Burgess writing, "16 lemons?" and The Courteneers frontman Liam Fray tweeting 16 pictures of the citrus fruit.

Stone Roses, fronted by Ian Brown, rose to fame in 1989, achieving legendary status among British music fans before their 1996 break-up.

After announcing a reunion in 2011, the rockers embarked upon a successful world tour but were rumoured to have been on the verge of parting ways last year (14).