Speaking afterwards, the well-respected drummer described how he "saw lights" in the corner of his eyes before collapsing and said he was at the start "of the long road of treatment for cancer."

Tributes have predictably come pouring in, with Charlatans frontman Tim Burgess tweeting, "Jon Brookes, my friend, our drummer and inspiration to so many, passed away this morning. We are torn apart. Love & thoughts to Jon's family."

A further statement from the band read: "Jon was a brilliant drummer, an inspiration, a founding member of The Charlatans, part of our family and a friend to everyone in and around the band.

"Losing someone who was always so full of life is a tragedy that will be shared by so many. Our thoughts are with Debbie and all of Jon's family."

Watch an interview with Jon Brookes:

BBC6Music DJ Lauren Laverne got the news during her morning show, tweeting, "Just hearing the terribly sad news about the death of The Charlatans' Jon Brookes" before playing the band's classic track Just When You're Thinkin' Things Over.

Guitarist Anthony Rossomando said: "A sad day. R.I.P Jon Brookes. Thank you for all the memories and the sweet grooves! My heart goes out to his family, friends and the band."

Born in Staffordshire, Brookes was a founding member of the influential band that formed in the West Midlands in 1989. They have had 22 UK Top 40 hits, including The Only One I Know, Can't Get Out Of Bed and One To Another. 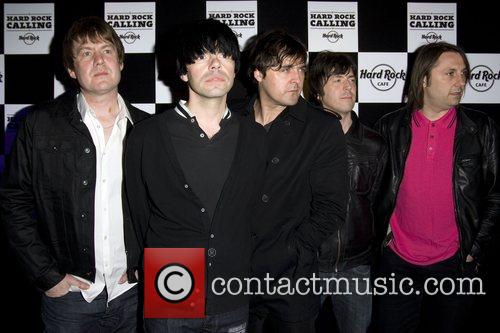 Jon Brookes Of The Charlatans [R]