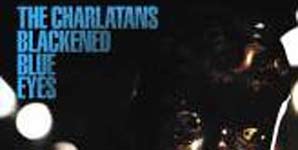 They may not be the biggest band in the UK, and may not be considered the best, but you have to be impressed when you think that The Charlatans have survived the Madchester scene and Britpop era. While reaction to their back catalogue has fluctuated, they've maintained a loyal fan base, and are now preparing to release their latest album, which was produced by Stereophonics cohort Jim Lowe.

Funked up piano lines and dance undertones pump through "Blackened Blue Eyes" to fantastic effect, while Tim Burgess' voice is as distinctive as when the band was first heard in the late Eighties. The rhythm section is relentless, and aided by shimmering guitars, 'Blackened Blue Eyes' shows the band have lost none of their knack for pulsating rock'n'roll. It's a very good indicator for the forthcoming "Simpatico" record.