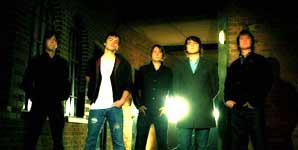 Almost ten years ago on their US Tour, The Charlatans drummer, Jon Brookes was quoted as saying "We've never been the sort of band that's felt we've got to sell ourselves to anybody, and if we've got to start making ourselves look stupid, then fuck it - we're not interested. We're certainly not gonna be anybody's dancing fool." And after releasing their ninth studio album, Simpatico, Brookes' words still ring true.

The single from the album, Blackened Blue Eyes had gone in at a disappointing Number 28 in the charts. Perhaps not surprising considering there was very little promotion despite the song being hailed as a true return to form after the disappointing 'Up At The Lake' album. It was also the subject of some cringing and deeply patronising "praise" from music mogul Alan McGee. Mr McGee claimed that Blackened Blue Eyes was their best single ever, and was up there with the best Oasis releases. Hopefully the irony was later pointed out to the former Oasis manager.
'

However, even with the lack of promotion, Simpatico hit the top ten this week, coinciding with the start of the UK Tour, of which the second night was at a sold out Glasgow Barrowlands. As the lights went down, wailing police sirens from Tony Rogers keyboards went up, and the band rattled into a pulsating version of new album track NYC (There's No Need to Stop). Quickly followed by the slower and angst ridden "For Your Entertainment", The Charlatans showcasing of their new tracks was being greatly received by the Glasgow audience. And then, they hit us with two classics, Tellin' Stories and Feeling Holy which pumped the crowd into a frenzy.

This sets the tone for the rest of the evening, there's no time for talking from frontman Tim Burgess, as the band blast through the setlist, songs old and new. The reggae-fuelled masterpiece, The Architect, has that distinctive Charlatans groove and hook in it, and it was certainly a highlight in an already blistering performance. "You're So Pretty, We're So Pretty" and "Jesus Hairdo" followed along with "Can't Get Out of Bed" and the nostalgists amongst us were in their glory.

One of the main highlights of any Charlatans concert has to be the performance of "One to Another". From the very second the keyboards and Mark Collins' guitar dart out the first few notes, the atmosphere is electric, and the venue rocks in unison with the crashing of Brookes' drums and Burgess' searing voice, it all builds to an epic last verse and it is so easy to see why this would have to be on every Charlatans fans dream
setlist.

After One to Another, you think the show must be coming to a close, but "Madchesters" finest keep it going, with stunning versions of "Blackened Blue Eyes", "When the Lights Go Out in London" and a rocked-up version of "My Beautiful Friend", they finish in style with their first ever hit, "The Only One I Know" and the ultra urgent "How High", ensuring the end of their set has everyone bouncing round the Barras.

A fantastic ovation sees The Charlatans return to the stage for a much sought after encore, starting with "Dead Man's Eye" followed by one of the bands greatest ever singles, "Just When You're Thinkin Things Over". Laden with a jangling keyboard line and fantastically zealous vocals, it has the crowd singing along, arms aloft as if it were a football terrace we were all standing on, but on this terrace, we know who the winner is going to be
before the game is up. It's The Charlatans, and as Jon Brookes also said, "We've had our periods where people couldn't give a shit about us, so all that we could have done was just to be ourselves. We've found that's been the best policy. We're not that commercially oriented or commercially smart." And how could anyone ever want them to be any different?

By the time the brilliant Martin Blunts bass is shuddering through the ubiquitous show closer Sproston Green, we've already witnessed them storm through 22 songs with amazing tightness and tremendous fervour.