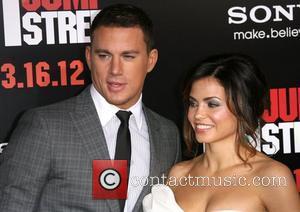 Movie hunk Channing Tatum pulled the prank of all pranks on Marlon Wayans during a boozy weekend with his pals - they decided to strip-gatecrash one of the funnyman's house parties.
The five pals were getting tattoos nearby when Tatum, a former stripper, realised how close they were to his hero's home and decided to pay him a visit.
Appearing on Thursday's Jimmy Kimmel Live! TV show in America, the actor said, "We home invaded Marlon Wayans' house - four white guys and a Puerto Rican guy got naked essentially... and there's, like, people in Marlon's house, like partying and having fun.
"But Marlon - this is the weirdest thing... he is playing chess with his cousin while a whole party is happening.
"We bust through the back door and Marlon was the only one that jumped up in, like, fighting stance. His cousin grabbed a pillow... He finally saw it was me and he just laid into his cousin. He's like, 'A pillow! Really! What are you gonna do with a pillow? You ain't in my family.'"