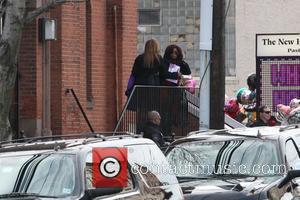 Singer Chaka Khan vowed never to inject heroin after Etta James showed her the shocking track marks on her arms from years of shooting up.
The I'm Every Woman hitmaker spent years battling her drug demons and was hooked on heroin and cocaine until kicking her habit in the early 1990s.
But despite sinking to the depths of addiction, Khan is glad she always steered clear of using needles after a sickening encounter with junkie James left her reeling.
She tells British magazine OK!, "When I first went to sign at Warner Bros. I met Etta James. She was standing outside in the hall waiting for me. I was a big fan, so I was really pleased to see her.
"She said to me, 'Whatever you do, if you wanna be in this business...' showing me the tracks on her arm, '... do not do this.' I said, 'Oh my God! Don't worry, I won't.' And I didn't. I snorted heroin for a good 10 years and I did cocaine, but I never injected."