Soul superstar Chaka Khan has revealed she once shot her second husband Richard Holland after he allegedly punched her in the face.
The I'm Every Woman hitmaker wed Holland in 1976, but their union was shortlived, and Khan admits all was not well behind closed doors.
The singer detailed an abusive relationship in her 2003 memoir, Chaka! Through the Fire, but she has only now confirmed that the lover in question was her ex, Holland, who is the father of her son Damien.
Khan admits they fought often, but one particularly bad fall-out had her reaching for a shotgun.
She tells America's National Enquirer, "I went for the shotgun, loaded it, pulled the trigger. I missed him because as soon as he saw the gun, he high-tailed it into the office, slammed the door, and turned out the lights."
Khan, who was eight months pregnant with her son at the time, called police for help, but lied to authorities and blamed the shooting incident on an intruder.
She continues, "When I came to my senses, as blood trickled from the wound above my eye, I wanted to damn myself to hell that Milini (her then-four-year-old daughter) had witnessed something like this. Not that it was the first fight she ever saw, but it was definitely the worst. I called the cops and made like there was an intruder in the house."
The fight ended the star's marriage to Holland - the man for whom she wrote her hit song Sweet Thing. 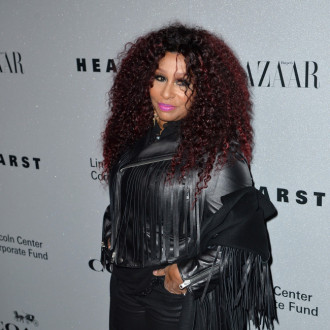