Canadian Singer Celine Dion Hailed Her Return To The Stage As A "New Beginning" After A Year Away From Performing To Care For Her Ailing Husband Rene Angelil. 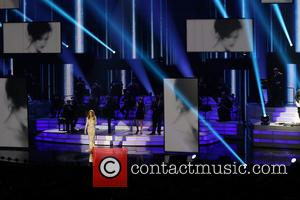 The My Heart Will Go On hitmaker put her career on hold in August, 2014 to look after her former manager and husband of 21 years as he battles throat cancer, but she returned in triumph with a Las Vegas show on Thursday (27Aug15).

Ahead of the gig at Caesar's Palace, Dion revealed her experience in caring for Angelil had given new meaning to her famous repertoire of love songs, telling reporters at a press conference, "I've been singing them for so long... but now I mean it, to me they'll become different songs. The words will come alive more than ever before."

After the show, Dion seemed moved by her return, writing on Twitter.com, "Thank you for all your love, Tonight was not a new day, tonight was not really a new show. Tonight was a new beginning."