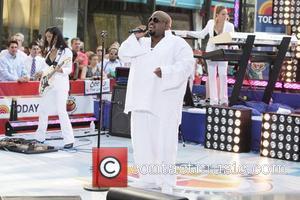 Soul star Cee Lo Green is set to launch his own residency in Las Vegas with a show inspired by flamboyant pianist Liberace.
The hitmaker first voiced his desire to follow in the footsteps of pop icons Cher and Celine Dion and become the first hip-hop artist to stage his own Sin City show last year (10), and now it appears he's landed a deal to make his dream come true.
Green announced the news during an appearance on U.S. breakfast show Today in New York on Friday (22Jul11) as he braved the Big Apple heatwave and struggled with a sore throat to perform tracks like Forget You and Bright Lights, Bigger City for his adoring fans.
However, he failed to go into further detail about where and when the run of Vegas gigs will take place, only revealing the concerts would be called "Lo-Berace".
He said, "Lo-Berace it is. I wanted to do something refreshing for this generation. I don't think anyone from my generation has gotten the opportunity to do something monumental like that. So I'd like to do something exceptional and I feel like the way I feel about myself and the way my career is going, it makes sense."
Green recently paid tribute to Liberace by dressing up as the artist in the music video for his song I Want You (Hold On To Love).
The colourful hitmaker is also embarking on a film career after signing on to play an entertaining mummy called Murray in Steve Buscemi's new animated movie Hotel Transylvania.