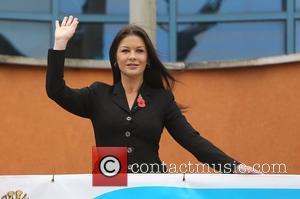 Picture: Catherine Zeta-Jones arrives at the Children's Hospital for Wales to attend an event for its official charity Noah's Ark, of which she is a patron....

Catherine Zeta Jones has spoken to In Style magazine about her long-standing battle with mental illness. In an attempt to erase the stigma associated with manic depression and other similar illness, she revealed that since being diagnosed with bipolar disorder, she has actually started to appreciate life more than she did previously.

The 43 year-old actress was diagnosed with bipolar II disorder – a form of manic depression – in April last year, when she was admitted to a rehabilitation clinic in the US. At the time, her husband, actor Michael Douglas was recovering from his treatment for throat cancer. “I’m not the kind of person who likes to shout out my personal issues from the rooftops,” said the actress, “but, with my bipolar becoming public, I hope fellow sufferers will know it is completely controllable… I hope I can help remove any stigma attached to it, and that those who don’t have it under control will seek help with all that is available to treat it.”

Zeta Jones admitted that one of the “smartest” things she’s done, since she’s been learning to live with her illness, is to stop going online and googling comments about herself, made by others. “I just stopped. Cold turkey. And it’s so liberating.” She went on to say that the last 18 months, since her diagnosis, have been as scary as they have been enlightening. She said that it’s been “an intense time in good ways and bad. You find out who you really are and who are you are married to. You find things inside yourself you never imagined were there.”