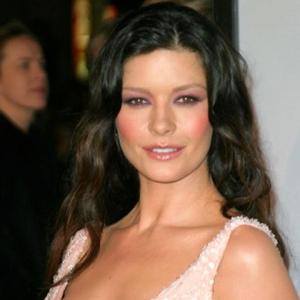 The 'Wall Street: Money Never Sleeps' actor - who has 31-year-old son Cameron from his previous marriage and Dylan, nine, and seven-year-old Carys with his current spouse - collected the prestigious accolade at the Film Society of Lincoln Center's 37th annual ceremony on Monday night, which was also attended by Bette Midler and Danny Devito.

Catherine, who Michael affectionately called Cathy at the awards, said through tears: "I'm most proud of Michael for the role of a father; the commitment to the three of our children, Cameron, Dylan and Carys, is extraordinary. And I thank you every day for that, darling."

The event was a more sombre affair than last year's ceremony - which saw Tom Hanks pick up the coveted honour - reportedly because of the "impact" Cameron's recent five-year jail term for drug dealing has had on his family.

A source told the New York Daily News newspaper: "No one could shake The Feeling that what Michael had gone through with his son was still omnipresent. It definitely had an impact on the evening.

"It would have been nice for Michael if it was a bit more festive, although I think everyone understood why it was a little different than years past. But it was still so important - and really moving - how many of his colleagues and friends came out to support him."

It was also noticed that the 65-year-old actor left Cameron out of his acceptance speech, despite mentioning his other children.