Catherine Zeta-Jones and Michael Douglas have quashed rumours they are divorcing, slamming the story about their marriage falling apart in The National Enquirer magazine as ''false''. 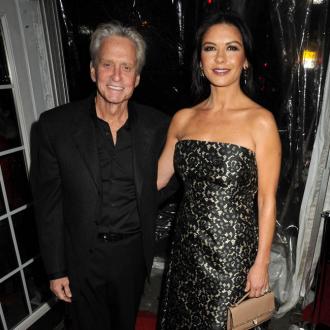 Catherine Zeta-Jones had denied she is divorcing Michael Douglas.

The 43-year-old actress has slammed claims she and her husband of 12 years are going their separate ways in a ''hush hush trial separation'', with rumours saying Michael is moving out of their home due to the pressures on their marriage.

The National Enquirer magazine reports their relationship has ''buckled under the pressure of dealing with Michael's cancer battle, his son Cameron's prison term on drugs charges and Catherine's struggle with bipolar disorder.''

However, the couple's spokespeople insist the claims are ''not true''.

Catherine's representative stated: ''That is absolutely not true,'' with Michael's spokesman Allen Burry also confirming: ''They have not split. The story is not true.''

The pair are said to be working on their marriage for the sake of their children - Dylan, 12, and nine-year-old Carys - and are determined to maintain harmony.

A source said: ''It's because of Dylan and Carys that Michael and Catherine aren't giving up on each other. Only time will tell if they can make things work.''

The brunette beauty has previously stated she finds the idea of divorce ''repulsive'' and will never go down that road.

She said: ''I find divorces repulsive. I will never get divorced. Never.''

The Oscar-winning stars have struggled with numerous dramas over the past few years.

The 68-year-old 'Traffic' actor was diagnosed with throat cancer in 2010, being given the all clear last year, and Catherine has regularly voiced the tribulations of her battle with depression - checking into a health facility last year to help with her illness.