Stars Turn Out To Support Jane Birkin At Daughter's Funeral 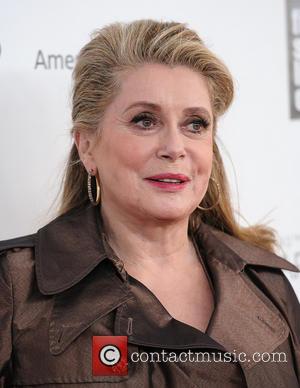 Actress Catherine Deneuve and France's former First Lady Carla Bruni-Sarkozy were at heartbroken Jane Birkin's side as she buried her daughter in Paris on Thursday (19Dec13).

The body of Kate Barry, singer/actress Birkin's daughter with composer John Barry, was found outside her apartment block in the French capital last week (11Dec13).

It is believed the photographer took her own life by jumping from her fourth floor balcony.

A memorial service was held at Paris' Eglise Saint Roch church, with her famous mother and actress half-sister Charlotte Gainsbourg leading the mourners.

Deneuve, a longtime family friend, was in attendance and carried a reef of white flowers into the church, while former French President Nicolas Sarkozy's singer wife Carla hid her tears behind sunglasses.

The congregation then moved to the Montparnasse Cemetery, where the body was laid to rest.

Barry's father, who was the longtime Bond music composer, died in 2011.

Catherine Deneuve Urges Stars To Give Up Social Media

Stars Turn Out To Support Jane Birkin At Daughter's Funeral

The Umbrellas of Cherbourg Movie Review

Paul Exben has it all: a job at one of Paris' most exclusive law firms,...