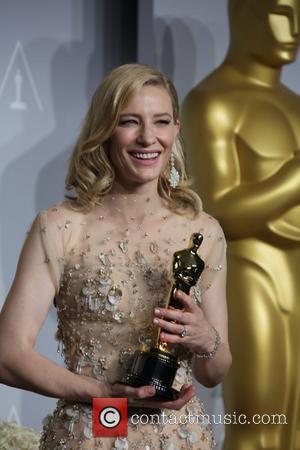 Cate Blanchett won the premier prize for actresses at Sunday night's Academy-Awards, and she wouldn't let it out of her sight.

The 44 year-old was presented with the Oscar for Best Actress for her role in the Woody Allen-directed 'Blue Jasmine'.

And to prove how priceless the accolade is, Blanchett revealed to Ellen DeGeneres, the host of this year's Oscars, she slept with the golden statue.

But before getting settled, it seemed a night of celebrating took its toll as the talk-show host had to assist her to the seat.

"What can I get you? I have Visine, I have Advil. I have water. I have a banana," Ellen offers the tired actress.

"Do you have a blanket or a coffee or something?' Cate asks, to which a crew member walked on set and handed her a blanket.

Despite feeling the effect of partying all night and having "a little bit of sleep", Blanchett did look surprisingly fresh.

"I left before you did (last night). I don't know how you are doing this," she said, applauding Ellen for conducting her show, after hosting the Oscars as well as attending the post-Oscar shindigs, until the early hour of Monday morning.

The audience in the studio also got their own Oscar experience as the guest of honor let each member hold her coveted award.

This was Blanchett's fifth Oscar nomination and second win, after she landed the best supporting actress statuette for Martin Scorsese's 'The Aviator' in 2005.

When accepting the award from Daniel Day-Lewis, she slammed the old-fashioned view that films with women as lead characters arn't as successful as male driven movies, by stating "audiences want to see them, and they earn money," which was greeted with a huge cheer for the crowd.

Watch Cate Blanchett's appearance on 'The Ellen DeGeneres Show' below