Cate Blanchett has said Woody Allen as a ''fantastic writer'' and she loved working with him on her new drama 'Blue Jasmine'. 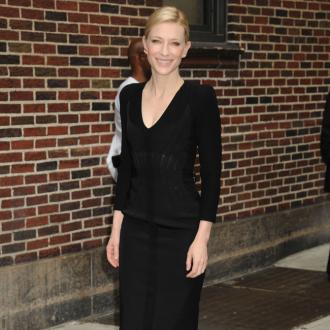 Cate Blanchett has praised Woody Allen for being a ''fantastic writer''.

The 41-year-old actress was quick to defend the legendary filmmaker when appearing on the 'Late Show With David Letterman' to promote her latest drama 'Blue Jasmine', which was both scripted and directed by Allen.

The TV host to joked that the 77-year-old scriptwriter - whose career spans half a century - often sleeps on the job, prompting Blanchett to joke, ''He's asleep or on his blackberry.''

She added: ''No, no, look, most of his direction happens in the script and it was such a great script. I mean, when Woody Allen calls you take that call.

''It's usually a quick call between 45 seconds and a minute and a half. I think, well if you ask him a question he'll answer, he's not rude. He's such a great writer. ''

Blanchett takes the lead in the drama, which focuses on woman who heads to San Francisco after a life crisis, where she reconnects with her sister.

Discussing the role, she said: ''Jasmine, the character I play, is such a fantastic creation and you think back to the pantheon of the films that he's made, there are some fantastic female characters.''

Allen - whose extensive film catalogue includes 'Midnight in Paris' and 'To Rome With Love' - has headed up an impressive cast for the film.

Commenting on her co-stars, Blanchett gushed: ''It's such a great, eclectic bunch of people, Andrew Dice Clay, Louis CK, Peter Sarsgaard is in it, Alec Baldwin and the gorgeous Sally Hawkins. So it was really a great bunch of theatre animals, so many theatre actors.''