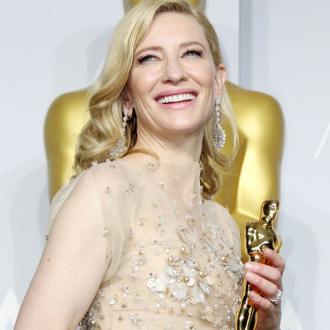 The 44-year-old beauty - who has sons Dashiell, 12, Roman, nine, and Ignatius, five - with Andrew - admitted accepting the award was a bizarre experience.

She explained: ''I was so stressed. I don't think I drank that much last night but it was such a release of adrenaline.''

Cate appeared on Ellen Degeneres' talk show just hours after the ceremony and admitted to the host - who had presented the awards - that she had only had ''a little bit of sleep''.

The actress replied: ''Do you have a blanket or a coffee or something?''

Ellen had arranged to have pizza delivered to the A-list audience at the Oscars, but Cate had to stop for food on her way home because she was away from her seat when the pies were distributed inside the Dolby Theater in Hollywood.

She said: ''I went to the bar to try and get something to eat and then they wouldn't let me back in!

''But all those actresses were hovering it up so I wouldn't have got a piece anyway.''