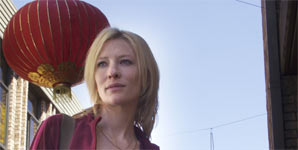 Little Fish, a story with a strong female perspective about the Heart family. Touched by tragedy and almost destroyed by drug addiction in the past, the lives of Tracy (Cate Blanchett), her brother Ray (Martin Henderson), mother (Noni Hazlehurst) and close family friend Lionel Dawson (Hugo Weaving) remain bound together as events overtake them once more.

How did the project and working with Rowan Woods come about?
I think I probably heard about the project two or three years ago - and all good things take time! The thing I really loved about Rowan as a director was that after the huge success of The Boys - one of those Australian films that survive more than a year, people are still watching and talking about it - he wasn't in any rush to make his second feature. We'd been speaking off and on about working together, and so it was just a matter of finding the right thing. He said that Jacquelin (Perske, writer) had written a script and he sent it me. I was really intrigued by it, I think primarily because of the characters. When you are dealing with supposed working class characters they are often clichéd, but this was a set of characters which didn't fit into any particular socio-economic group – they are almost a forgotten class of people.

What do you think about the characters in Little Fish?

These are people who have had exciting and hopeful dreams in their twenties, which have all been dashed on the rocks, and now they have to reapprentice themselves to their parents and try and work out who they are in their thirties. This is a whole group of deeply uncool and unfashionable people who never get represented in cinema.

How did you prepare for playing your character Tracy?

I think that that it would be really easy with a project like this - it being Australian - for me to assume that I would understand Tracy's world, so it was really important for me and for Rowan to accept Tracy as a really complicated character. I treated her like she was German – I know as little about that culture as the culture that Tracy comes from. I had to find her voice, find her movements, find her place in the world. Over 18 months, Rowan would intermittently send me DVD research with interviews of people from Tracy's world. There was an interview with a woman about Tracy's age who ran a video shop and whilst she wasn't an exact Tracy model she was a corner of Tracy's existence.

What did you think about working with director Rowan Woods?

I loved that about Rowan, he's meticulous in the way the he fills an actor's imagination with an entire universe, down to the teacups and napkins that they had at their third birthday party. So when you go into filming – it's Jacobian almost – you have a whole repertoire of memories and shared imagery.

What do you think about playing Tracy?

What Rowan and I talked about a lot, as a recovered addict, is that she didn't fit neatly into the NA model. She hadn't gone down that sort of 'person who never recovers' path who then gets addicted to the group networks. She's much more isolated and much more shut down than that. She's recovered with her mother; de-toxed at home. There is a very strong sequence of scenes in the film with Lionel (Hugo Weaving) who is Tracy's mentor and father figure - the Jesus to Tracy's Mary Magdalene - the iconography continues! He asks her to score for him, and I decided that was her trigger: the getting on, that was her excitement.

You must have swum a lot on this shoot?

I love swimming! I can completely relate to Tracy on that level. The freedom of weightlessness and the noise of the water. Like in a swimming carnival where you can hear the slush slush of the water and the roar of the crowd - it does normalize you I think, going swimming in the ocean.

What was it like playing a family member and working with Noni Hazlehurst and Martin Henderson?

It's always quite nerve-wracking when you have to play a family member because families have such an unspoken series of complicated dynamics that span twenty or thirty years. How do you capture that with people you don't know in a week or two of rehearsal, and bring all that history to screen? But when you've got Noni Hazlehurst playing your mum, and Martin Henderson playing your brother… it was just such a joy to do because they are incredibly playful detail actors and so easy to get along with. Through the rehearsal and also from take to take those family details really took shape.

What do you think of Tracy's relationship with Hugo Weaving's character Lionel?

He is the one character that Tracy feels she can give to as opposed to take from. In a strange way she is the mature one in that dynamic. That's seductive for her, as he has been a father to her yet suddenly she can take control of him, foster him and care for him. Whereas she feels like the adolescent child in the dynamic with her mother. The first time you see Lionel and Tracy together, because there is such a deep complicated love there, you could possibly think they are boyfriend and girlfriend. I've always seen the film as having two romances: the one between Tracy and Lionel and the more obvious love connection between Johnny and Tracy.


Did you enjoy working with Dustin Nguyen?

I've loved working with Dustin. There's a really unique deep stillness that he's brought to Johnny. It's a really deep well of sadness and loneliness in the character that I sort of glimpsed in the script – but that he's really brought to the surface. He's the one person who can make Tracy slow down.