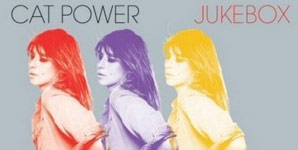 Cat Power is the stage name of Chan (say 'Shawn') Marshall, a singer who has built an incredible mythology around her stripped down style. Recording since 1995, it was really 2003's You Are Free, an album of originals featuring guests such as Dave Grohl and Eddie Vedder, that broke through.

Jukebox is Power's second covers album, although it is the first with the Dirty Delta Blues Band, which gives it a more rounded sound that the somewhat sparse first (called The Covers Record). The band gives this album the feel of the Cowboy Junkies' Trinity Sessions mixed with some kd lang torchiness. Tracks include songs by Hank Williams, Billie Holiday, Bob Dylan, Janis Joplin and Joni Mitchell - there are some great selections, all made to sound like her own songs. However, that's partly because she does the same thing to each of them - they're not explored for their own essence, but for the way they can fit her sound.

Any Cat Power disc's better than none, but there is more variety and more great music on The Greatest, her previous album of originals.