Review of The Greatest Album by Cat Power 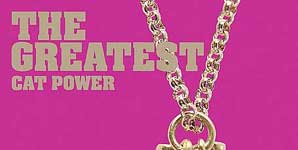 Cat Power (real name Chan (pronounced Shawn) Marshall) has made albums of rare intensity to date, mixing her smoky voice starkly and intimately up front over backings ranging from folk to rock.

Here, she is joined by various Memphis musicians, including Al Green's guitarist, and generates a much fatter, jazzier sound, not unlike that made by the remarkable Toni Childs at the beginning of the 90s. While the confessional style she made her own previously is missing, The Greatest has its moments where she moves the game on significantly.

Unfortunately, they are mixed with some pretty mediocre moments, which does take some sheen away from what is another good album. Something of a cult artist, Cat Power is clearly comfortable in a few different genres, and has something to offer each. The Greatest isn't her best, but it is pretty great.