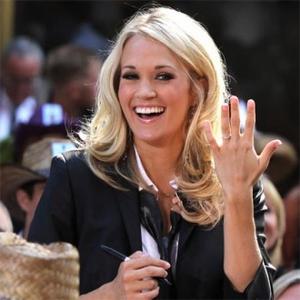 The country singer has signed a contract with the cosmetics firm as says it's a dream come true because she has been using The Company's products for "at least a decade now".

The 27-year-old beauty: "As a little girl I remember my mom always using the original Olay Beauty Fluid and encouraging my sisters and I to take care of our skin. I love that Olay has managed to change with the times, yet stay in touch with Women of all ages who want affordable skin care products that do what they promise."

Carrie will appear in both print and television adverts for Olay's Challenge What's Possible campaign, set to come out later this year.

As well as keep her skincare routine simple, Carrie also didn't want any extravagance when it came to her hairdo for her recent wedding.

Carrie tied the knot with ice Hockey player Mike Fisher in July and the bride was keen to have her blonde tresses put up because she didn't want her locks ruined by the heat.

Her make-up artist Melissa Schleicher said of the nuptials at the Ritz Carlton Reynolds Plantation in Greensboro: "It was really, really hot and it was raining around 4 o'clock, just before the wedding, so I had to think of the humidity. The Hair was a concern so I did kind of an updo. I just it curled it all over and just pieced it up and pinned it with bobby pins all over, real simple."