Carrie Underwood has made history after been named Entertainer of the Year at the Academy of Country Music (ACM) Awards last night (18.04.10), the only woman to take the honour twice. 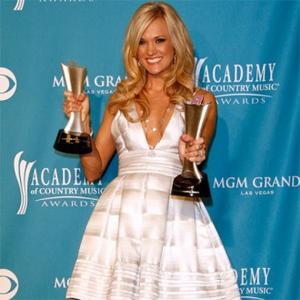 Carrie Underwood has been named Entertainer of the Year at the Academy of Country Music (ACM) Awards.

The singer made history at the Las Vegas ceremony last night (18.04.10) after becoming the first woman to win the prestigious accolade twice, beating off competition from Taylor Swift, Kenny Chesney, Keith Urban and the Zac Brown Band.

Upon accepting the honour, Carrie - who was also given a special Triple Crown award in recognition of her scooping Entertainer of the Year, Top Female Vocalist and Top Newcomer in the course of her career - said: "I think I just got make-up all over Brad Paisley... Thank you, God, praise the Lord."

Trio Lady Antebellum were the big winners at the ceremony, held at the MGM Grand hotel, taking home five prizes, including Song of the Year and Single Record of the Year for their hit 'Need You Now' - with both categories giving them two prizes as they also wrote the track.

Accepting their fourth award, singer Charles Kelly said: "We are having a blast tonight. We love you all. We will never forget this night."

After winning Single Record of the Year, he added: "We just want to say how much fun we're having. I just want y'all to know this moment is not lost in our eyes. We are living our dream right now. We've waited our whole lives for this.

"It's just wild, man. You never know where a song can take you, and tonight is probably the pinnacle of our career."

Other winners included Miranda Lambert - who won three accolades, Top Female Vocalist, Album of the Year for 'Revolution' and Video of the Year for 'White Liar' - Brad Paisley, who was named Top Male Vocalist, and Luke Bryan who took home both the Top New Artist and Top New Solo Vocalist gongs.

Entertainer of the Year:

Single Record of the Year:

'Need You Now' by Lady Antebellum

Song of the Year:

'Need You Now' by Lady Antebellum

Vocal Event of the Year: