Country Star Carrie Underwood Made An Effort To Avoid Writing An Entire Album Of "Mummy Songs" After Welcoming Her First Child Earlier This Year (15). 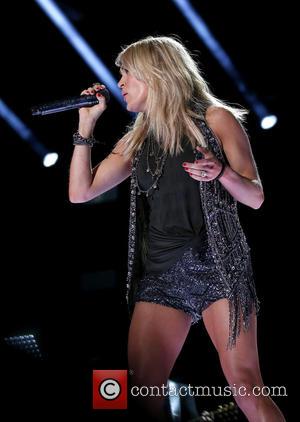 The Before He Cheats hitmaker gave birth to Isaiah, by her hockey player husband Mike Fisher, in February (15), and for the past few months, she's been working on another important project - her fifth studio album.

In an interview with Entertainment Tonight, Underwood revealed she was focused on staying the same artist she was before becoming a mum, and consciously stayed away from writing an entire record about parenthood.

She said, "I'm not gonna sit back and make a whole album of mummy songs. It was really important to me to stay true to who I was before. But now, I just have this other little magical piece of my life."

However, Underwood wasn't completely immune to writing a tune for little Isaiah, adding, "We did write a song for the little man. I was actually trying to resist that urge but it just kinda happened and it was really organic and sweet. I think it's going to be really cool thing for him to know that that's his song."

Underwood's Storyteller album is slated for release on 23 October (15).