Carrie Underwood to write about the UK?

Carrie Underwood would love to write a song about the UK and thinks bands from all over the world could have hits with country tracks in the US. 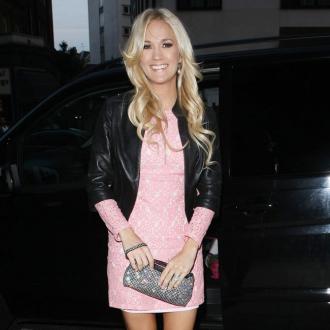 Carrie Underwood would love to write a song about the UK.

The 'Before he Cheats' singer is headlining The C2C: Country to Country festival at London's The O2 on Sunday (17.03.13), and thinks the country could provide suitable inspiration for one of her future hits.

She told BANG Showbiz: ''I've been to England a few times already. And country music is full of such incredible writers. I think we could sit down and write a song about anything. About breakfast at St. Pancras [railway station]? Sure, I bet. The train, that's a country image.''

Carrie, 30, thinks her genre has become so diverse she could imagine bands from all over the world could make it in the US.

She added: ''I think an English act could make it. The cool thing about country right now is that there are so many different kinds of country music.

''You can turn on the radio and hear some people who are really traditional, who have been around forever and still have a huge following, then people like me, Rascal Flatts and [New Zealander] Keith Urban. He's not from the US and he's one of our biggest stars. Things that are more rock, more pop and even people who are rapping in country songs lately, I don't know how.''

The C2C: Country to Country festival will be staged at The O2 in London on Saturday (16.03.13) and Sunday (17.03.13) and will feature performances from Little Big Town, Tim Mcgraw, Darius Rucker, Vince Gill, Leann Rimes and more. Tickets are available now, for more information visit www.gigsandtours.com