Carrie Underwood has shared the first photograph of her baby son on social media, one month after his birth. 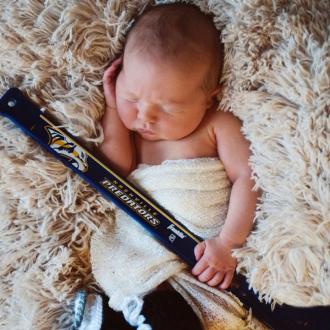 Carrie Underwood shared the first public photograph of her baby son on her Instagram account on Sunday (29.03.15).

The 32-year-old singer gave birth to her and husband Mike Fisher's first child Isaiah Michael Fisher a month ago but refrained from posting a snap of the tiny tot on social media until now.

The country singer uploaded a picture of the little one asleep with a miniature hockey stick lying across him as a token to Mike's ice- hockey team The Nashville Predators, who played Canada's Calgary Flames late Sunday afternoon.

She captioned the adorable image: ''The Predators are in the playoffs! Just waiting to get called up! #PutMeInCoach (sic).''

The blonde beauty shared a picture of Isaiah's tiny hands and feet earlier this month when she announced he'd been born.

Shortly before giving birth, the 'Blown Away', who married Mike in 2010, admitted she was looking forward to getting her body back.

She added: ''The whole process itself [has been] really beautiful. Even when I feel pretty large, it really is such a miracle and such a beautiful thing.''