Carrie Underwood has revealed her new album 'Storyteller' has some rock and R&B influenced songs as well as lots of traditional country tunes. 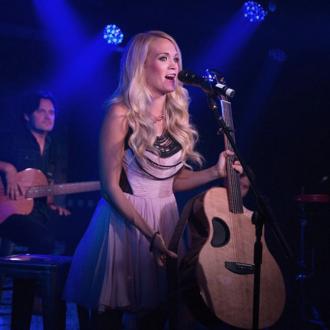 Carrie Underwood says her new album has a bit of ''R&B flair''.

The 32-year-old country superstar will release her fifth studio LP 'Storyteller' on October 23 and as well as containing lots of songs that are true to her musical roots she has revealed there are also some songs on which she tries out new genres.

Speaking to BANG Showbiz at an exclusive show at The Edition Hotel in London - at which she performed her latest single 'Smoke Break' - on Tuesday night (22.09.15), Carrie said: ''My album will be out in late October, hopefully it will do well, especially in the UK. I'm excited to have new stuff to play.

''I want people to give it a chance. Everybody is influenced by everybody else, so there's some rock in there, some R&B flair in there, some traditional country stuff. It's really good.''

The 2005 'American Idol' winner has been in the UK to perform at the Apple Music Festival but although she would love to go sight-seeing in London she just hasn't had time because she needs to get back home to the US to her husband Mike Fisher and their six-month-old son Isaiah.

She said: ''I love London, I would have liked to have stayed longer but I left my baby at home, so I've just wanted to do as much as I can in a short space of time. If I go to I'm touristy areas I do get recognised because there's always Americans there! But I've done the whole double decker bus thing.''

Having performed at the inaugural event in 2013, Carrie will return to play all three nights of the festival with C2C being held at The O2 in London, the Dublin 3 Arena and for the first year at Glasgow's Clyde Auditorium, the first time the festival has run for three nights.