New Mum Carrie Underwood Has Been Given Another Reason To Celebrate After Landing Five Nominations For The 2015 Cmt Music Awards. 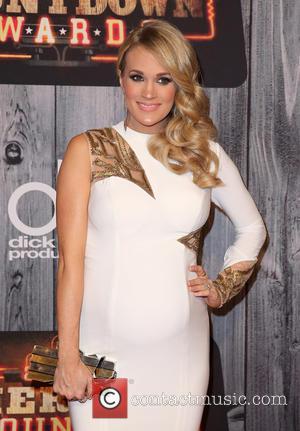 Picture: Carrie Underwood - Shots of a host of celebrities as they took to the red carpet for the 2014 American Country Countdown Awards which were...

The singer, who welcomed her first child in February (15), scored double nods in two separate categories - Something in the Water and her Miranda Lambert duet Somethin' Bad are up for Video of the Year, while she will compete against herself for Female Video of the Year, as Little Toy Guns and Something in the Water are both shortlisted for the honour.

Somethin' Bad landed Underwood her fifth nod for Collaborative Video of the Year.

Lady Antebellum, who helped to announce the first three groups of nominees on U.S. breakfast show Today on Wednesday (13May15), and Kenny Chesney notched up three nods apiece, including Video of the Year for their respective hits Bartender and American Kids, which also landed Chesney a Male Video of the Year nod. The singer and the song will compete with Play It Again by Luke Bryan, Keith Urban's Somewhere in My Car and Jason Aldean's Burnin' It Down, while Lambert's Little Red Wagon and Reba MCEntire's Going Out Like That join Underwood as Female Video of the Year contenders, and Lady Antebellum's Bartender will go up for Group Video of the Year alongside Little Big Town's Day Drinking and Chainsaw by The Band Perry, among others.

Meanwhile, a number of non-country artists also feature among the 2015 nominations for CMT Performance of the Year - John Legend is shortlisted for his rendition of You & I (Nobody in the World) with Lee Ann Womack, while Katy Perry's version of Roar with Kacey Musgraves and Aloe Blacc and Lady Antebellum's Wake Me Up duet will also compete for the title.

The winners will be decided by public vote and revealed during the CMT Music Awards, which will take place in Nashville, Tennessee on 10 June (15).