Carrie Underwood is spending her 32nd birthday with her newborn son, Isaiah, and says he is the best birthday gift ever. 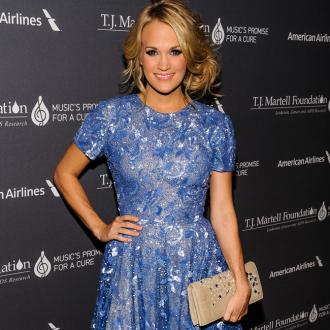 Carrie Underwood says her newborn son is the best birthday gift ever.

The 'Blown Away' hitmaker, who gave birth to Isaiah Michael Fisher 11 days ago with husband Mike Fisher, was thrilled to kick off her 32nd birthday celebrations with ''a tiny semi-bald chubby dude'' in the early hours of this morning (10.03.15).

The blonde beauty wrote on Twitter: ''HAPPY BIRTHDAY TO ME! My 1st present = late night date with a tiny semi-bald chubby dude who likes to grunt & cry & pass gas! #bestgiftever''

She also posted a photograph of the tot snuggled up in grey and white clothing, but concealed his face.

The former 'American Idol' star's husband, who is a professional ice hockey player, later thanked their fans for their support, writing: ''Thanks for all the prayers and wishes over the past week! Having a child is the best thing in the world!''

Shortly before giving birth, Carrie admitted she was looking forward to getting her body back.

She said: ''The whole process itself [has been] really beautiful. Even when I feel pretty large, it really is such a miracle and such a beautiful thing.''