Carrie Underwood admits she is 'O.C.D.'

Carrie Underwood admits she is fussy about being in control of certain aspects of her life, likening it to Obsessive Compulsive Disorder (O.C.D.). 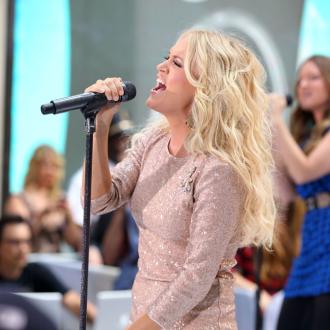 Carrie Underwood admits she is ''O.C.D.'' about certain things.

The 'Two Black Cadillacs' singer has a hectic touring and recording schedule and admits she gets fussy about being in control of certain aspects of her life, likening it to Obsessive Compulsive Disorder (O.C.D.).

She told BANG Showbiz: ''I'm O.C.D. about time, I'm early for everything to the point where it freaks people out. That's my one - it's a good thing I guess, but I know it's annoying to the people around me. I'm on time for everything. If I'm late something's wrong, like I've wrecked my car.

''My life is so nuts, there are few things I am in control of, but those I am uber in control of. That's why I'm on time, because I can control of that. Food I'm weird about food, because I can be. There's certain organisational things. Stuff has its place all the time. I'm not a clean freak, but there are certain things that have their place and that's the place they have to stay.''

Carrie is performing in London on Sunday (17.03.13) headlining the Country to Country festival at city's The O2 venue and said she's going to be including a few of the earlier tracks from her debut album 'Some Hearts' from 2005.

She added: ''We're not changing the set, we definitely want to sing songs we thought people might recognise a bit more, so there's stuff from my first album that I haven't done for a while in my concerts back home, but it's pretty much the same.''

The C2C: Country to Country festival will be staged at The O2 in London on Saturday (16.03.13) and Sunday (17.03.13) and will feature performances from Little Big Town, Tim Mcgraw, Darius Rucker, Vince Gill, Leann Rimes and more as well as Carrie. Tickets are available now, for more information visit www.gigsandtours.com