It might be age, it might be the strong Abu Dhabi sun, but Carrie Fisher thinks her old Star Wars cohorts are looking melted. Still, she was quick to point out how happy she was that they were all back together again as filming continues for J.J. Abrams’ hugely anticipated reboot.

“We all look a little melted. It’s good to see other melted people,’ she said. “And it is good to have us all in a room because it’s unique. I mean, I don’t suppose they have reunions for the Gone With The Wind gang.”

Fisher is reprising the role of Princes Leia, the character that made her famous back in 1977 in ‘A New Hope’. Mark Hamill and Han Solo are also back for the reboot, which was kickstarted by Disney, the new owners of LucasFilm and everything Star Wars.

Fisher added that she wanted to get Princess Leia “right” this time, despite turning her into a global sex symbol still going strong today. "I'm fighting for the buns, but that's always what I'm doing. I think they should make an appearance if I just walked by a rocket window, and I was in buns," she joked, according to The Guardian.

"I [originally] thought they were horrible, but I was 19 and I thought they made a mistake hiring me anyway. I thought if I kept very quiet they wouldn't notice. George did say to me, 'What do you think of them?' I said, 'I think it's fantastic' but I did think it was awful."

And that golden bikini? “I wear it on special occasions. I’ve got it on underneath this. I wear it always, for luck.”

Star Wars Episode VII will be released on December 18, 2015. 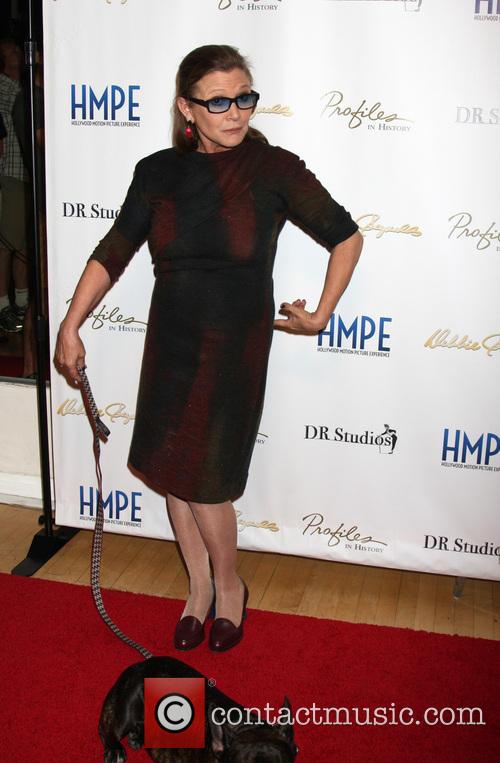 Carrie Fisher and dog pose for the paps