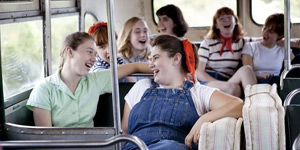 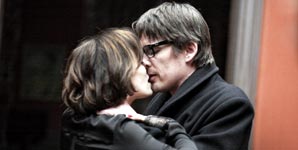 By Rich Cline
Very Good
This biopic kind of dwells on the misery in Coco Chanel's life, but it's a strong story of a woman who made her own way against all odds. And it's skilfully and beautifully filmed and acted.

After her mother died in 1895, Gabrielle Chanel (Cohen) moves into orphanage, gwhere nuns teach her how to sew. As soon as she's 18 (now Tautou), she becomes a bar singer with her sister (Gillain) and is dubbed "Coco" after her signature song. Even now she's rebelling against the constricting clothes of the day, and when she becomes the mistress of the wealthy Etienne Balsan (Poelvoorde), she has clear ideas about her own life. What she doesn't expect is that she'll fall for his friend Boy Capel (Nivola).

Director-cowriter Fontaine tells this story like Chanel's fashion style: ielegant and detailed, but without frills. The film takes us through these early years in a somewhat dispassionate way, only drawing emotion from Tautou's mesmerising performance. She conveys a sharp, opinionated intelligence even as Coco knows her place in society. And as she quietly evolves to the moment she becomes the Coco we remember, Tautou keeps the character consistently engaging without sacrificing any of her inner toughness.

Fontaine doesn't shrink from portraying this male-dominated society: men atreated women like possessions. So Coco was a true revolutionary, going against the grain to become the first major female designer. Fontaine makes sure the period detail is sleek and gorgeously recreated, with actors who aren't afraid to show the dark sides of their characters. There are moments of levity, but powerful scenes between Tautou, Poelvoorde and Gillain reveal a shadowy complexity.

The problem is that the film feels a bit gloomy as a result; Coco seems melancholic even when she's smiling. And this carries through to the limited colour scheme, as well as Coco's simple clothing in a time when women wore outrageous frills. But watching closely, we can see Coco in control of her life, even though the men around her thought she was theirs. And into this world, Nivola's Boy is a breath of fresh air, a rare man who can see her for who she is. So where their story goes can't help but move us.
#BR_

The Book Of Life Review

By Jeremiah Kipp
Excellent
After six feature films shot with the same "too hip to smile" minimalist approach, critic's darling Hal Hartley really needed to shake things up. Shot on hand-held digital video as part of the France Collection 2000 series, The Book of Life is that project, a shaggy dog guffaw at the end of the millennium.

Miles away from what we critics enjoy referring to as "visually austere" (i.e., static shots with careful compositions), The Book of Life throws caution to the wind. Working with new cinematographer Jim Denault (Boys Don't Cry) instead of old standby Michael Spiller (Trust), Hartley spins and fusses in colorful blurred abstractions, creating a dreamy, impressionistic look with none of his trademark hard edges. Look, ma -- no hands!

The Book of Life Movie Review

After six feature films shot with the same "too hip to smile" minimalist approach, critic's...