The legendary singer is awarded for her services to music

As big weeks go, Carole King can easily boast the biggest; she’s become the first woman to win the Library of Congress’s Gershwin Prize for Popular Song, and she’ll be ‘In Performance at the White House’ on May 22.

At the Library of Congress event, she’ll perform alongside Patti Austin, Colbie Caillat, Michael Feinstein, Siedah Garrett, Louise Goffin, Shelby Lynne, Gian Marco and Arturo Sandoval. The award, which was established in 2007 to celebrate the music-writing team of George and Ira Gershwin, is to be presented to King at the White House tomorrow following tonight’s intimate performance at the LoC. Tomorrow night, she’ll be joined by Gloria Estefan, Billy Joel, Jesse McCartney, Emeli Sandé, James Taylor and Trisha Yearwood. She keeps some stellar company indeed! Previous winners of the Gershwin prize include Paul Simon, Stevie Wonder, Paul McCartney and the team of Burt Bacharach and Hal David. With a career spanning five decades and more than 20 solo albums, King is certainly a worthy recipient of the prize.

Since walking to the doors of visiting music industry executives on an A-Z basis, hoping someone would like her enough to give her a deal, King – then known as Klein – has become one of the most respected artists of her generation. Her Grammy Award-winning 1971 album Tapestry sold more than 13 million records, and stayed in the Billboard charts for as massive 302 weeks. 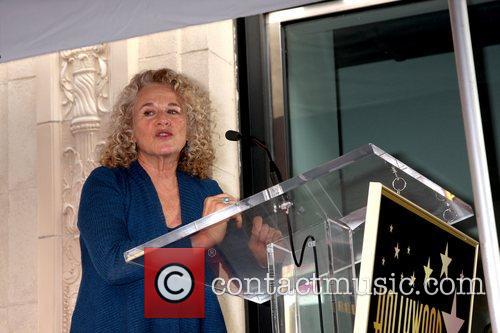 Carole King on the Hollywood Hall of Fame