Canadian singer Carly Rae Jepsen says discovering she was up for Best New Artist at the MTV Video Music Awards was the most surreal moment ever. 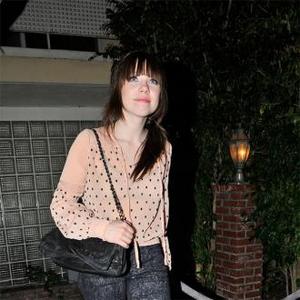 The 'Call Me Maybe' singer is stunned at how much her life has changed since her sudden rise to fame and says discovering she was up for the Best New Artist award at the 2012 MTV Video Music Awards was the most surreal feeling ever.

Carly, 26, told MTV News: ''I have to pinch myself. I mean, a year ago I was touring Canada in a soccer mom van, and all of the sudden, my life's just taken off in a completely different direction.

''Moments like that just let it really sink in. It's crazy.''

The Canadian starlet thinks even being considered for the title is an honour because of the stiff competition from international acts One Direction with their chart-topping tune 'What Makes You Beautiful', Frank Ocean with 'Swim Good', The Wanted with 'Glad You Came' and Fun with 'We Are Young' featuring Janelle Monae.

Carly said: ''When I found out, I think I was on tour somewhere, on the bus with the boys, and I think I screamed it to them, and we all did a little dance party victory on the bus.

''Even to be listed among those names is honestly just crazy to me. I'm a big fan of all of them.''

The excitable brunette first rose to fame in 2007 as a finalist on 'Canadian Idol', but has teen heartthrob Justin Bieber to thank for her recent success.

Carly is gearing up to open for the 18-year-old star on tour from September.