Carly Rae Jepsen was starstruck during her entire video shoot with Tom Hanks even though he made her feel ''really comfortable''. 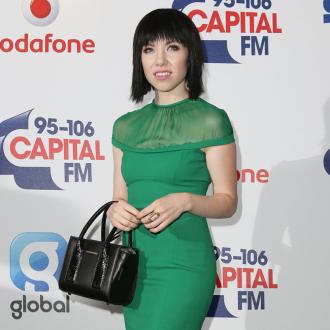 Carly Rae Jepsen was starstruck during her entire video shoot with Tom Hanks.

The 29-year-old singer cast the Hollywood star in the promo clip for 'I Really Like You' and struggled to stay cool because she was so excited to spend time with him.

She said: ''I was on a cloud that whole shoot. Usually I'm starstruck for a minute and once I get to talk to the person and realise how human they are, it's like, OK, you're really chill.'

''With Tom Hanks, even though he made things really comfortable for the entire day, in my head I kept being like, 'It's Tom Hanks!' Oh my goodness!'

''I tried to keep it cool on the outside. I was telling my friends, 'I want to bring props from his videos like a box of chocolates and a volleyball and get him to sign everything.' And they were like, 'Please don't do that. Try to be cool.' ''

Carly is good friends with Justin Bieber and enjoyed being in the audience for his recent Comedy Central roast - though she did feel guilty when she laughed at the jokes.

She told heat magazine: ''I was there in the front row for the Bieber roast. That was a lot of fun - you could see he was so lighthearted about it.

''I was proud. It was funny, we were on a table with all the people from his management team, and every time there was a good joke, we were all guiltily drinking our wine and being like, 'Is it OK if we laugh?'''