Richie Sambora And Carlos Santana Celebrated The Life Of Blues Legend B.B. King By Taking Part In A Memorial Service In Las Vegas On Saturday (23may15). 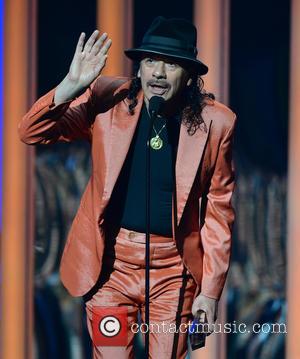 The guitar great passed away on 14 May (15) after battling a diabetes-related illness, and on Saturday, his family and friends headed to Palm Mortuary chapel in Sin City to pay their respects in a private service.

More than 350 mourners bid farewell to King, who laid in a closed casket adorned with flowers and two of his beloved guitars. Relatives delivered eulogies, while other family members sang a capella versions of his songs during the two-hour service, which included a standing ovation for the late bluesman.

Explaining his presence, former Bon Jovi rocker Sambora tells the Associated Press, "Buddy Guy and B.B. let me into the blues... That's why I'm here. He made me family."

King's onstage drummer Tony Coleman, who worked with the legend for 37 years, added, "He fired me five times... But he hired me six times. He said, 'Once you're with me, you're always with me.'"

King's legacy will be celebrated again on Sunday (24May15) at the 35th annual B.B. King Homecoming Festival in Indianola, Mississippi, near his birthplace of Berclair.

His coffin will then feature in a procession on Beale Street in Memphis, Tennessee on Wednesday (27May15) to mark where he found fame, before his remains are flown to Indianola for a public viewing on Friday (29May15) ahead of his burial on Saturday (30May15).