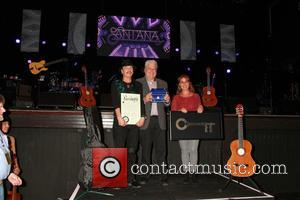 Adam Lasher sported a cast over his right wrist after injuring his hand in a skateboarding accident, but that didn't stop him from showing off his guitar skills and winning over the star-studded panel by performing a song called These Shoes, which he had written himself.

During the audition, which aired in the U.S. on Thursday night (22Jan15), Lasher credited his uncle with teaching him how to play the instrument, calling him "a Jedi with a guitar", but he did not mention Santana by name - and Lopez, Connick, Jr. and Urban appeared unaware of who his famous relative was, even though show host Ryan Seacrest had discussed it with the 27-year-old wannabe prior to his try out.

Lasher also amused the judges after Lopez compared his look to that of U.S. late night host Jimmy Fallon, while the aspiring singer revealed he was a diabetic after Urban inquired about a pouch attached to his guitar strap.

He will now move on to the next round in Hollywood.