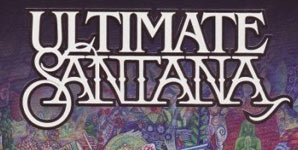 There have been 'Best of' Santana discs before, mostly collected from the early instrumental discs. Here, however, 'ultimate' may just literally mean 'the latest' disc, as there are mandatory new songs (only one of which really works). It features a great deal more of what Santana has been known for recently - collaborations with guest vocalists.

The 'essential' old stuff is there - Oye Como Va, Samba Pa Ti and Black Magic Woman - but they're alongside Number 1s like Smooth and Maria, Maria. Nickelback's Chad Kroeger adds vocals to Into The Night, and it's a bit of a frog chorus. Neither Tina Turner nor Michelle Branch can save The Game of Love (in two separate versions) from mediocrity. However, Carlos Santana's guitar is a thing of real beauty - fluid lines and remarkable funk allow screaming emotion and gorgeous Latin melody. That ability to wrest something unique from a song is shown on his 1977 cover of She's Not There, which becomes wild panther-like in his hands. There isn't another guitarist who sounds like Santana, and the number of guest stars (including J Lo in a new song here) is testament to his enduring appeal.