While it's amusing and sometimes very funny, there's an air of desperation about this sequel to the 2014 breakout hit comedy. The main problem is that, instead of pushing the characters forward in any way, the plot is basically a rehash of the exact same series of events. So the cast and crew rush through it in the hopes that audiences might not notice, throwing in issues like girl power and gay marriage to make it look like they noticed the criticisms of the first movie. 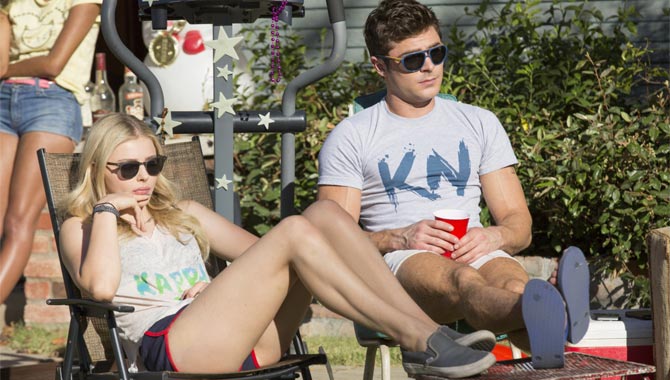 It's been a year or so, and now Mac and Kelly (Seth Rogen and Rose Byrne) are selling their house to move to the suburbs before the birth their second child. But just as the sale is agreed, a sorority moves in next door, founded by Shelby (Chloe Grace Moretz) in defiance of the usual frat-house rules. They get help from former fraternity leader Teddy (Zac Efron), who's aimless because his best pal Pete (Dave Franco) has just agreed to marry his boyfriend. So Mac and Kelly are worried that the loud parties are going to jeopardise the sale, and when talking with Shelby fails, the stand-off escalates into all-out war. And when the girls turn on him, Teddy swaps sides to help take them down.

The dialogue is packed with hilariously wrong humour, mainly adult gags that are spoken around very young children. The idea of a little girl who chooses a pink dildo as her favourite toy is good for one laugh, but perhaps not the next 10 the filmmakers try to wring from it. Meanwhile, there's a strange exhaustion in the air, as both Teddy and Mac seem tired of all of this nonsense. Efron and Rogen play the roles with impeccable timing, but both seem aware that they've already pushed these characters as far as they possibly can. Byrne has a lot more spark, and provides most of the best laughs. And Moretz shows some skill at spiky silliness.

Mac and Kelly's lives have moved forward a lot since the problems they had with the fraternity house next door. Their daughter Stella is growing up and Kelly is pregnant with another baby. Their little family is growing and it's time to move to a bigger house. However, their new neighbours (a small sorority house who have big plans to ditch the usual implied, sexist sorority rules and prove that they can party just as hard as the boys.

By Chris Cabin
Very Good
Like trip-hop group Massive Attack, David O. Russell started off quiet and slowly became loud as all get-out. With all the craziness and banter that came out over Russell's philosophical slapstick masterpiece I Heart Huckabees, it's hard to believe that his foray began with this very quiet, very shocking film. Even the settings seem to have slowly become more and more convoluted: Spanking the Monkey was filmed in a quiet, almost-Podunk town in upstate New York, I Heart Huckabees is set in the sprawling, bombastic landscape of Los Angeles. However many differences I can name, there's no denying that both films are Russell's; they both exude a peculiarity and hypnotic style that piss plenty of people off.

By Christopher Null
Very Good
Probably the best mother-son incest movie ever made, and I mean that from the heart. Incidentally, this is David O. Russell's first film, launching his career as a purveyor of the truly bizarre.
1
Carla Gallo