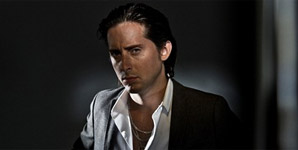 Carl Barat's eponymous debut solo album is a world away from the anarchical sounds of his former bands. We caught up with the Carl to talk about life as a solo artist, what's next for The Libertines, and why his new record is drawing comparisons with Tim Burton.

Hi Carl, how are you?
Very good, thank you.

So, your new self-titled album is out now. Perhaps you could speak a little about the recording process and how the record came to fruition?
Erm, well, let's see. We recorded it over two weeks, with the help of a rather special guy, called Leo Abrahams, who produced it. It was just really fast, the songs were written mainly piano based so it was a bit different for me. Starting with piano and layering it all, and we had unlimited freedom with instruments and arrangements.

Was a solo album always on the cards for you?
Well, I sort of guessed it would be the next natural step, but I didn't really find the motivation till maybe the end of last year. So I then I sat down and I wrote it over a three-month period, on my own, and sometimes with the help of a few other guys.

At the height of The Libertines fame there were always tracks turning up on the Internet, some of which never found their way onto studio albums, did you choose any old songs for your solo record or is it all new material?
It was a little different with The Libertines because of course we had a lot of songs before we ever had a deal, so we were always recording bits here and there. But on my own, I pretty much wrote the songs and everything went on the album. There were two extra songs that I wrote and they ended up going on the Japanese edition, so I used everything really.

I read that someone had likened the album to a Danny Elfman composition for a Tim Burton movie, how does that make you feel?
That's great, well, I'm not that big on Danny Elfman, I mean, I really appreciate him, but I don't think I'd listen to him for pleasure. But, it's funny you should bring up the Tim Burton comparison because when I first played 'The Fall', we did it on the piano and people were like.. 'that sounds like Tim Burton'..but yeah that's excellent.

Well, the sound of the new record is definitely a radical departure from the garage rock of The Libertines and Dirty Pretty Things - how much of effort did you place on not sounding like your previous bands?
Oh yeah, well it was definitely a conscious thing. I mean, some tracks that we had.people were saying, 'ooh it sounds like The Libertines', so we just changed some things around really. We took out all of the really loud guitars, and we found that there was actually some really nice detail sat underneath and it was good to bring some of that out.

Does it worry you that your solo material is always going to get compared to Pete's (Doherty)?
Nahh, not really. It's not as if we're trying to do the same thing anymore. When Babyshambles and Dirty Pretty Things were around at the same time I think we probably kept an eye on what each other were doing.but they were pretty dark times.and then things started to get a little better, but of course we looked out for what the other person was doing.

If you heard something Pete released that you particularly enjoyed, did it inspire you to try and write something better?
Erm, I'm not sure. Maybe when I heard 'Fuck Forever' I thought.. 'right!' Yeah maybe a little bit, but.I don't know.that time has passed I suppose.

Ok, so as well as the new record, you recently published an autobiography, 'Threepenny Memoir', could you speak a little about how you came to write it?
I suppose the reason that I sat down and wrote it was initially for catharsis, but I also needed to put the years of my life into perspective, I needed to move on. I'd read so many other interpretations of it, I didn't really know what was going on myself, it was quite confusing. So, I decided to get some friends to help me come up with things to talk about, in order to give a sort of fair sense of the story really.

There's been countless Libertines biographies released in recent years, did they have any influence on you wanting to set the record straight in your own words?
Not really, I mean most of those books are mainly sensationalist Pete stuff. 'Threepenny Memoir' is more for me than setting any record straight to be honest. I don't know, it may even contain stuff that Libertines fans don't want to hear, but I'm not going to hide behind something I'm not, I'd rather just deliver the truth.

In the book you speak about your crippling stage-fright, did that intensify in the period when Pete was failing to show up for gigs?
Yes, it certainly intensified what was already there, and then the realisation that you're disappointing people kicks in.and the two things together.it's quite a force. A lot of the fans were very angry and the 'we want Pete' chants were to be expected really but you have to face it. You partly want to say..well.why did you come to the gig then? But I used to count my blessings when eventually it would get down to only six 'Pete' chants per gig.and then perhaps only one.

You've got a UK solo tour coming up, how will you manage your stage-fright in those situations?
Well, I've yet to really give the whole solo thing a good crack but I have done a few shows and it's different, it's nerve-racking but as long as I can play the songs.it should be good. But yeah, I've always been on the stage really - even though I don't know how I first got up there - so I should be ok. I'll chuck in a few favourites as well as the new material but hopefully the people who come to the gigs will enjoy the new record, that's always a bonus.

You appeared in the play 'Fool For Love' earlier this year, you've now written a book, how much of Carl Barat is still a musician?
All of me I suppose, It's the same energy, it all comes from the same place. Writing a song.writing a book, it's all coming from the same place. I'd like to write a novel one day though.I haven't got the story yet but it's definitely something I want to do. But with the acting.if you're lucky enough to get some really cool parts then you can't turn them down really. But then again, I'm not going to end up in Marley & Me 2 (laughs).

How did you come to appear in the play? Did you audition?
Yeah I did, well, I did a read-through. That was really petrifying. But my rationale for doing it was just to think that kids can act can't they? You get these really amazing child actors, so I thought there's no reason that I can't start now. It was really hard, but I learned a lot from it though. I'd do it again, if it was the right part I suppose.

It's recently been suggested that you're now 'settling down', your first child is on the way, and the new album is a world away from the anarchical sound of The Libertines. Do you think there's now less chance of a genuine reformation of the band?
Not really, I don't feel any different. My schedule is still just as hectic, but I really feel like I'm on a journey to be honest. But of course I'd like to do something with The Libertines again, I think what we did with the festival shows this year was just to seal a chapter. But yeah I want to try and do something, maybe in the next year or two, and see where it goes. The shows this summer were kind of us reaching our potential, going out there and playing to that many people, it's that ambition and potential that we never realised, and now we can act on that.

Your life was essentially played out as a soap-opera in the various magazines for about two years, did you have any sense that that was happening at the time?
Yeah, it felt strange really. But, it was what is was, it was electrifying and fraught. But yeah, it's best to ignore it all (laughs). I didn't really notice all of it at the time to be honest, but now I kind of think.why were there people crying at our gigs? But yeah, I'm very proud of what we did really.

So, what's next for you in the coming months?
Just touring and promoting the record and the book really, I've been working 14-hour days so far. We'll probably announce some more shows soon, this first tour is just kind of putting the feelers out really, and hopefully then we can do some more.

Good luck with the album, the tour, and the book Carl. Thanks for speaking to us today.
Thank you very much, no problem at all. Thanks!